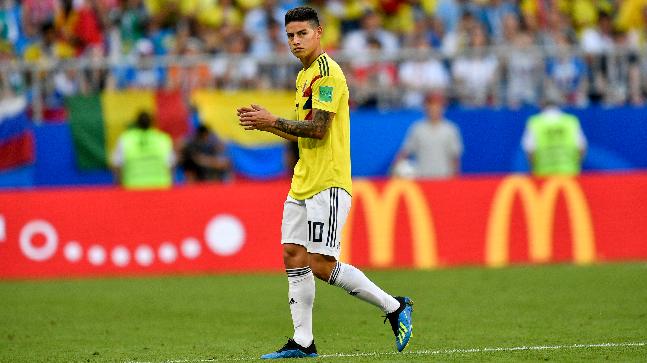 2018 World Cup: Rodriguez, injured, could play for Colombia against England

James Rodriguez missed practice on Saturday and a scan showed he had slight swelling in his right calf, three days before a round of 16 game against England in the World Cup.

But the Colombian playmaker is not as badly injured as feared, raising the possibility that he could feature in Tuesday’s clash.

Rodriguez, who was the 2014 World Cup top scorer, has been hampered by the injury since the tournament began in Russia.

The Colombian Football Federation (FCF) issued a statement in the early hours of Sunday providing an update on Rodriguez.

“James RodrÃ­guez had a CT scan today which showed he has minor edema (swelling caused by a buildup of fluid) in his right leg, but there was no muscle tear.” , said the CLF.

Rodriguez left the field in the 31st minute of Colombia’s 1-0 win over Senegal on Thursday night, but his injury was never officially revealed as the reason for the substitution.

The South American team face England on Tuesday at Spartak Stadium in Moscow.

Ahead of Saturday’s practice, midfielder Carlos Sanchez and the substitute keeper also failed to shed light on Rodriguez’s recovery.

â€œJames is a leader, but I’m also sure if James isn’t around there are others who can step in and make a difference,â€ Sanchez said. “Every member of the team is there to play and they have the experience.”

Rodriguez missed two training sessions before Colombia’s first group game against Japan and did not start in the 2-1 loss. He was fit enough to play a full 90 minutes in the second game against Poland in the 3-0 win.

With Colombia facing England on Tuesday, the possibility of Rodriguez not being fit enough to play would be a major headache for coach Jose Pekerman.

“It’s no secret what James means to us, not only in football terms, but for the squad. But I stand by what Carlos says,” said Camilo Vargas. â€œAt the national team level, everyone has the hope of giving their best.

“Whatever happens, all 23 players have this dream.”