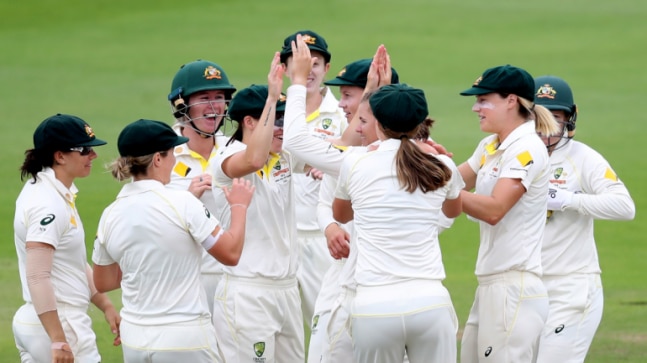 Ashes test: Australia retained the Ashes after drawing a draw in the only test against England in Taunton on Sunday. Meg Lanning’s wives had dominated the ODI series, winning 3-0.

The Australian women retained the Ashes after a dominant performance in the single test. (Photo Reuters)

The Australians held onto the Ashes even before the start of the T20 3-game series, drawing a draw in the only test at Taunton County Ground on Sunday.

Women’s Ashes is a points-based series and the team that accumulates the most points at the end of the series will win the trophy. A team will be entitled to two points for winning an ODI or a T20I. If the match is tied or abandoned, both teams will receive one point each. The test alone had 4 points to gain and England needed nothing less than a win to keep their hopes up.

Australia dominated the ODI series against England winning it 3-0 and the draw helped them retain the Ashes. England and Australia will play three T20Is, starting July 26.

Australia were the holder of the Ashes as they won it in England’s backyard in 2015 and then retained the trophy in Australia in 2017.

Led by the hundred Ellyse Perry, Australia posted 420/8 declared in their first heats which stretched to 3 days after an interruption of rain on Day 2. Australia were 230/7 in the second heats of the day 4 before players shake hands, signaling the end of a drawn test.

Ellyse Perry went undefeated on 76 as the senior Australian hitter dominated England’s bowling offense in the only Ashes test. Ellyse Perry scored her 2nd straight score of over one hundred points in an ash test as her 116 in the 1st inning gave Australia early control.

Notably, Ellyse Perry was fired after 329 races, 655 balls, 3 years, 11 months and 6 days in the cricket test as the Aussie star fell after doing a hundred on Day 2.

Versatile Sophie Molineux scored a quick 41stroke to cap the Ashes’ memorable debut. The 21-year-old will be the one to watch in the future as she demolished England’s batting unit, finishing 4 for 95 in 37 overs.

Molineux got the big wickets from Heather Knight, Amy Jones and Sarah Taylor on Day 3 to rock England’s response.

Natalie Sciver led a valiant fight for England reaching 88 to make sure England’s middle order does not crumble. Amy Jones’ 64 established a good platform for the hosts, but they failed to build on it.