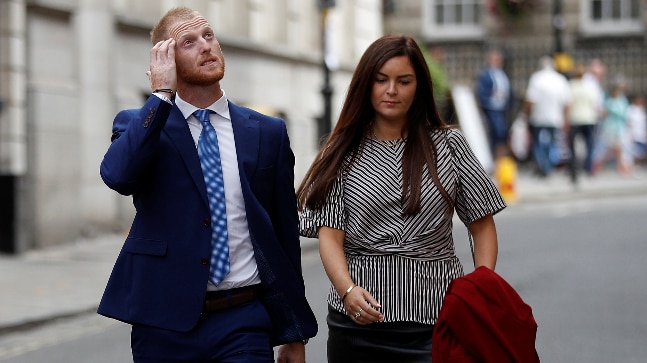 Absent all-rounder Ben Stokes sent his best wishes to his England team-mates, especially rookie batsman Ollie Pope, ahead of the second test against India at Lord’s on Thursday.

Stokes is on trial at Bristol Crown Court on charges of knocking out two other men outside a nightclub in the town in southwest England in September last year.

On Thursday, Stokes wished his colleagues good luck in a Twitter post accompanied by an Instagram photo of versatile Sam Curran, as Pope, a 20-year-old Surrey star, celebrating a wicket.

“Good luck to all the guys at Englandcricket today and for the rest of the week it’s always exciting to see guys grab the first chance, hope you go well @ opape32 #loveengland” wrote Stokes.

Good luck to all the guys in English cricket today and for the rest of the week, always exciting to see the guys come up the first chance, hope it goes well for you for you @ opape32 #lovengland https://t.co/7y4yb2sLne

Prosecutors said Stokes was the “main aggressor” in a fight that erupted after a game against England. The 27-year-old, however, has denied the charges against him.

But in a statement provided to police and heard in court on Wednesday, Stokes said he only intervened after hearing two men being homophobic towards two other men.

Stokes said “things had gotten too serious to ignore and I had to intervene.”

Stokes himself is accused of making fun of gays outside the club earlier and throwing a cigarette butt at them. Stokes denies taunting them, telling police they “thanked me for preventing them from being beaten.”

His absence will be a big blow to England in the second Test at Lord’s which has yet to start due to relentless rain in London.

Stokes is in good shape with the ball after taking 3 wickets in the first test as the hosts picked up a 31-point victory at Edgbaston on Sunday to lead 1-0 in a five-game streak.

(With contributions from the agency)