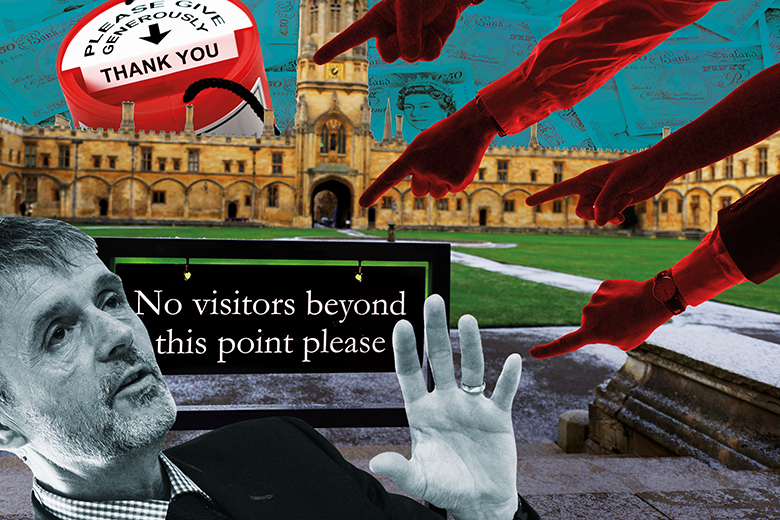 The disheartening saga of Christ Church, Oxford, is now entering its fifth year. If it was a school in Bootle or Basildon, there is no doubt that it would have already been subject to special measures. Instead, Oxford’s largest college – both financially well-endowed and socially well-connected – was left to wage its own messy fratricidal war without much official scrutiny.

Oxford colleges are fiercely independent institutions, run by their own governing bodies and genetically programmed to be wary of interference from outside bodies. The college visitor is the queen – and no one to date has sought to embarrass Her Majesty by dragging her into the endless dispute over whether it was right to spend huge sums of money to dislodge her own Dean , the Very Reverend Martyn Percy .

But there are signs that the university’s leadership, which so far has watched rather helplessly from behind the scenes, is now scrambling to get involved. More worrying – for Christ Church and for other colleges in Oxford and Cambridge – are the unmistakable signs that the Charity Commission, which since 2010 has been the ultimate regulator of colleges, is flexing its considerable muscle.

The two actions may not be unrelated. For if the Charity Commission were to decide that the governance of such an august educational institution was not fit for purpose, what would be the implications for dozens of other colleges in Oxbridge – and perhaps beyond ?

The problem is simply posed. The way Christ Church governs itself – a small group of so-called censors, answering to a huge “council” or governing body – does not correspond at all to the guidelines outlined in a number of official and unofficial codes on how any other charity in the UK should operate. Here are a few:

The challenge for the Charity Commission is that Christ Church – with its 65 trustees (or, as they are strangely called, “students”) plus a few former censors – does not look like a “normal” charity at all. Academics become de facto members of the governing body when they are appointed as fellows. But while someone may be a brilliant biochemist, that has nothing to do with the skills needed to oversee a charity. There are currently 62 around the table, with one vacant, one in jail and one helping police investigate allegations of papyrus theft.

While things were going reasonably well, the commission could turn a blind eye: “Oxford is Oxford: we do things differently” pretty much washed out. But when things went so horribly, disastrously and excruciatingly bad at Oxford’s greatest college, people naturally wondered why such an immensely wealthy and elite institution could ignore conventional instructions and advice and rule itself as she sees fit. “One rule for them…” as the current mantra goes.

Imagine a charity in Bootle or Basildon treating its regulator in such a high-handed way. The commission’s response – to remind trustees that penalties for incorrect, incomplete or misleading answers include fines or jail time – suggests that patience is running out. Christ Church said it would respond in due course. And, for the record, he believes that the commission’s warnings should not be read too much.

And then consider those who were most active in agitating for the dean’s removal. One has been a trustee (prior to the college’s official charitable status) since 1987 – over 34 years. Another seems to have accumulated over 20 years (it’s hard to be precise: publicly available details are scarce). Another racked up 31 years. A newcomer – but very influential – has been in office for 14 years.

Enough to frown in an average Bootle charity.

This steely behavior of the regulator no doubt explains the unprecedented approach of the “students” of Christ Church by the vice-chancellor and the chancellor of the university. They have no formal power to intervene. But they will have spoken to other house leaders, most of whom preside over perfectly well-run quorums and who fear that the ongoing mess at Christ Church will have serious implications for their own self-reliance.

And then there’s the reputational damage to the university as a whole, since few outside observers distinguish between the behavior of an individual college and “Oxford” in general. The university has recently, under its outgoing Vice-Chancellor Louise Richardson, begun to shed its reputation for elitism and disregard for the conventions that apply to other higher education institutions. How appalling that a group of college scholars could generate so many destructive headlines over such an extended period of time.

Whatever your sympathy for the endless bloodshed at Christ Church, it’s hard to deny that there has been a monumental failure of governance. How many millions in so-called charity funds have been spent trying to unseat the head of the organization? Nobody really knows. How many millions more donations have been withdrawn or withheld? The same. Could mediation have produced a different outcome? We don’t know – and it’s probably the same for most trustees.

How many of those 65 trustees have asked why, when outside eyes have independently reviewed the available evidence, they find clearly in favor of the Dean? If so, what responses did they receive?

How many trustees have asked to read the closely guarded verdict of Sir Andrew Smith, a prominent High Court judge, exonerating the Dean – available for reading, but kept under lock and key? How many have questioned the vast sums spent on more than one London PR firm to promote the official narrative and blacken the Dean’s name? Is this how charities are supposed to behave? Have any administrators questioned whether it was fair and reasonable for the Dean to be denied his legal fees – even when he won? Is this how decent charities work? How many other regulatory investigations have they been told of attorneys who have been hired to represent the College?

The Dean’s mental and physical health record is obvious to all. Now the college is threatening to take him to another court for not being resilient enough to run the college.

Is this how reasonable charities behave?

I should declare an interest. In November 2018, I met Martyn Percy at an official event in Oxford. We barely knew each other, but he looked so thin and emaciated that I was afraid he was seriously ill. I tentatively asked after his health. After a few days, he came to see me on his bike and told me a bit about what had happened. It seemed obvious that he received little support from his own colleagues: he had, indeed, been sent to Coventry.

Out of basic human goodwill, I offered moral support. This instinct to help a colleague in difficulty allowed me to be part of the Percy team. This was seen as a bad thing by some trustees of the charity that is Christ Church. One of them went to the trouble of calling a tabloid editor to try to smear me — before telling the same editor an outright and extremely damaging lie about his own dean.

So I got an inkling of what it was like to have upset some trustees of this very powerful charity, which has over £500m in the bank and isn’t afraid to use it.

The Chancellor and Vice-Chancellor discovered that they too would be in the line of fire if they dared to intervene. Leaked emails show that the trustees of this august educational charity recently spoke to expensive London PR consultants about potential humiliating damage to the reputations of Richardson and Chancellor Chris Patten (“a dinasour”) [sic], scoffed an administrator) if they ventured to get involved.

Think about it. An educational charity’s first instinct, when asked for a meeting with its own Chancellor and Vice-Chancellor, is to rush to an expensive West End PR agency (run by a former editor of the famed OKAY! magazine) for advice – and then discuss whether the reputational damage to their leaders could be fatal.

The Charity Commission’s latest steely intervention surely means this four-year-old saga cannot continue in its opaque and lavish fashion. This is surely good news. But the longer-term implications for Oxford and Cambridge colleges may be just beginning.

Alan Rusbridger is editor of Perspective magazine. He was previously editor of The Guardian and Principal of Lady Margaret Hall, Oxford.