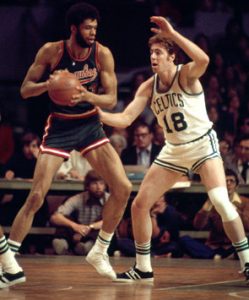 Cowens, a native of Newport, honored at the New England Sports Museum awards ceremony on Tuesday

Newport native Dave Cowens, a member of the NBA Hall of Fame and one of the Boston Celtics’ most iconic members of the 1970s, was honored Tuesday night at the New England Sports Museum’s annual awards ceremony, “The Tradition”, in the TD Garden in Boston.

What few people may not realize is the fact that Cowens – who led the Celtics to two NBA championships – nearly gave up basketball while enrolled at Newport Catholic High School. .

During his freshman year at NewCath, Cowens left the basketball team after a conflict with the junior varsity coach. He turned to swimming and track and field, and it looked like Cowens, a modest 6-foot-1 at the time, would never return to the basketball court.

Without a five-inch growth spurt between his sophomore and junior years, Cowens’ name might never have been known beyond his hometown of Newport.

By the start of his junior year, Cowens had grown to 6ft 6in. He joined the NewCath basketball program as the college junior team now had a new coach. At the end of his second junior varsity game, Cowens was ordered to dress for the varsity contest. He then played three quarters for the varsity team, and a basketball legend was born.

In its final year of 1965-66, NewCath won the 9th region championship and posted a 29-3 record. Cowens averaged 13 points and 20 rebounds as a senior. He earned a basketball scholarship to Florida State University, where he became a star player.

At Florida State, Cowens tallied 1,340 rebounds in three seasons. He also averaged 19.0 points per game and shot 51.9 from the floor. The 6-foot-9 Cowens was seventh in the nation in rebounds (17.2 rebounds per game) as a senior and led Florida State to a 23-3 record.

As a star NBA player, Cowens has scored 13,516 career points and averaged 17.6 points per game. Cowens’ side have also distributed 2,910 career assists and added 488 blocks. He shared NBA Rookie of the Year honors with Geoff Petrie in 1971, and he was named NBA MVP in 1973.

Cowen, whose unconventional career and style are portrayed by Dan Shaughnessy of the Boston Globe, was elected to the NBA Hall of Fame in 1991.

A few takeaways from the annual New England Sports Survey