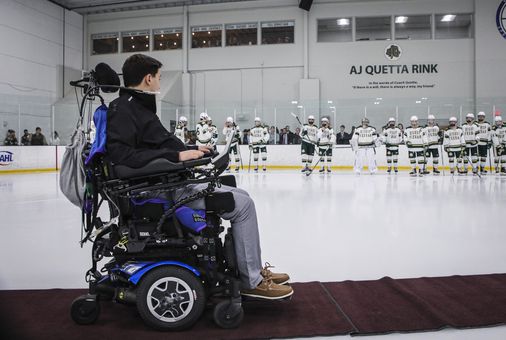 On Saturday night, the New England Sports Village dedicated its main rink to Quetta, celebrating a young man who withstood all odds in his tenacious recovery after a devastating crash on the boards on Jan. 26 in West Springfield.

“Tonight’s dedication is as much about the future as it is about the past,” said Rob Reilly, manager of the New England Sports Village, which opened in 2017. front row to see you make a difference for so many thousands of people around the world.

Surrounded by his parents, sisters and family, dozens of former teammates and classmates, and hundreds of current Feehan students and their families, Quetta was gentle and humble. His address to the crowd lasted less than 30 seconds.

“The way you supported me tonight was so amazing,” he said. “I have no words. Thank you. Thank you for everything.”

A few minutes earlier, speaking in the rink restaurant, Quetta found a few words to describe the moment.

“It’s such an honor to have a place named after you,” he said. “This place is going to stay for a while, so future generations will see my name. It means a lot to me.”

Before the Shamrocks fell 4-1 to Catholic Central Wide foe Archbishop Williams, Quetta reflected on his days playing on that ice, especially the intense battles with rival North Attleborough.

“These are the moments of my life, really. These are once-in-a-lifetime opportunities to play games like this in front of crowds like this,” he said before lamenting, “Unfortunately, I never put one in those games.

After months of rehabilitation at Massachusetts General Hospital and the Shepherd Center in Atlanta, Quetta has made progress in recovering head and neck movement. Now, just 10 months after leaving hospital, he’s taken on a coaching role with the Shamrocks, analyzing practice and game footage, working with the team’s forwards and helping with program communication. . Sporting director Christian Schatz said his impact had already been felt.

“It’s invaluable. He is an asset to the program,” he said. “It’s not just about the Xs and O’s. He can impart life lessons to these kids that could have a huge impact on them.” That’s what high school sports are for.

As the ceremony began, Quetta took to the ice to the sound of the first piano notes of Queen’s “We are the Champions” as the crowd cheered feverishly. During the short ceremony, Quetta was flanked by two dozen former teammates in costume, including fellow 2021 graduate Kevin Barrera, who recalled many post-game laughs Quetta drew in the locker room a few meters away.

“He’s hilarious. He’s a huge character in the team,” Barrera said. “He was also one of our best players. He’s one of my favorite kids to have in the dressing room every year. He still has the same attitude and quick-witted comments.

Although his sense of humor was intact, it was Quetta’s determination throughout rehab that impressed Barrera the most.

“I don’t think anyone else can do it better than him,” he said. “He’s stronger than anyone I’ve met. He proves everyone wrong. It is a source of inspiration.

As the community rallied around the Quetta family in the wake of their accident, AJ’s Army was formed, with a mission to provide long-term support, both emotionally and financially, to the family. This mission now has a tangible home.