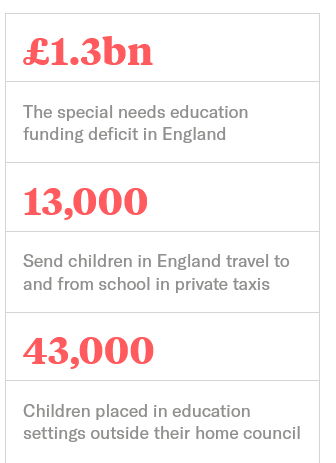 A report published today by the Bureau of Investigative Journalism has uncovered a £1.3billion ‘financial black hole’ at the center of the special needs education and disability system – and it is growing rapidly”

Education crisis: The SEND families have been fighting for their rights for several years

Croydon council’s DSG deficit – the Dedicated Schools Grant – has risen by more than a fifth in the last financial year as covid pressures and growing demand for special education services have seen the Borough schools spend an extra £4m that they don’t have.

Croydon’s DSG was in deficit by £22.52million at the end of the 2021-22 financial year, according to figures obtained by the Bureau of Investigative Journalism for a special report on the growing crisis around education needs funding and Disabilities – SEND.

For cash-strapped Croydon, this growing shortfall in its education budget presents a significant strain on its finances, as the town hall plans to cut £38.4m from overall spending this financial year. With Whitehall-imposed commissioners watching every move, even after already cutting many non-statutory services, Croydon is set to cut a further £30million from its overall spending in 2023-24.

And although Croydon’s DSG deficit is far from the worst – Tory-controlled counties Surrey (£118m, up from over £50m last year) and Kent (103m pounds) top this particular table – that’s still enough to warrant the council submitting a recovery plan to the DfE.

Inside Croydon reported earlier this week how neighboring Merton needed a £28.8m bailout from the DfE due to spiraling education budget deficits which official reports said were presenting ‘a significant impact on the council’s resources and potentially on the authority’s financial resilience”.

Croydon council’s overall finances, in case anyone needs a reminder, went bankrupt in November 2020 and last year the borough received what was then a government record bailout of 120 million of pounds sterling. So returning to Whitehall so soon due to issues within its education department might not be welcomed.

Yet as the Bureau of Investigative Journalism report foundIn that regard, at least, the SEND funding crisis is hitting local communities across the country.

Today’s report says: “As the government launches a consultation on the future of the SEND offer, a Bureau investigation revealed the human consequences of a desperately underfunded system. With a huge deficit in local authorities in England continuing to grow, the result is an increasingly adversarial process in which parents, schools and local authorities are pitted against each other, the needs of a child appearing secondary in relation to the financial costs.

It is this ‘conflict’ situation with which the SEND families of Croydon, Sutton and Surrey are all too familiar.

Like Inside Croydon reported as early as 2017, the council was spending up to a third of its SEND budget on legal fees for Education Tribunal cases, typically when the authority sought to avoid having to bear the full costs of children and children. Young Adults’ EHCP – Education, Health and Care Plans, which are supposed to be agreed upon and outline how the state will provide for the needs of young people, sometimes up to the age of 25.

The Bureau report today indicates that there is a financial black hole at the center of the SEND system and that it is growing rapidly.

“The Bureau’s investigation found the special needs deficit across England has reached at least £1.3billion, an increase of around £450million in the last year alone.

For some local authorities, the growing indebtedness is unsustainable.

Councils blame growing demand and growing complexity of needs, problems exacerbated by the covid-19 pandemic and pressures they are struggling to cope with due to a shortage of local government funded SEND services. This has led some – like Merton – to become dependent on private schools, never the cheapest option. Some families are forced to seek suitable placements further from home, driving children away from their local communities and leaving them with long commutes to and from school.

Across the country, at least 43,000 children are placed in schools or other educational institutions outside their home local authority, the Bureau reports.

Of these, 3,300 are educated more than 20 miles away. The Bureau has found one case where a child is being educated more than 400 miles from home – the distance from his family in Cornwall to Newcastle at the other end of England.

Stephen Kingdom, spokesman for the Disabled Children’s Partnership, a coalition of 100 charities for children and people with disabilities, said the Bureau’s investigation revealed “worrying data about the distances children with disabilities travel just to go to school. ‘school”.

In the face of government pressure to cut costs, some councils are considering imposing thresholds or introducing other changes that could make it more difficult for children to access support, or are threatening to withdraw or reduce what they have already. Some boards reject nearly half of all requests for children to be assessed to determine if they need the additional support provided with an EHCP.

News, views and analysis about the people of Croydon, their lives and their political times in London’s diverse and most populous borough. Based in Croydon and edited by Steven Downes. To contact us, please email [email protected]

Election promises of the conservative Torfaen group for the local elections