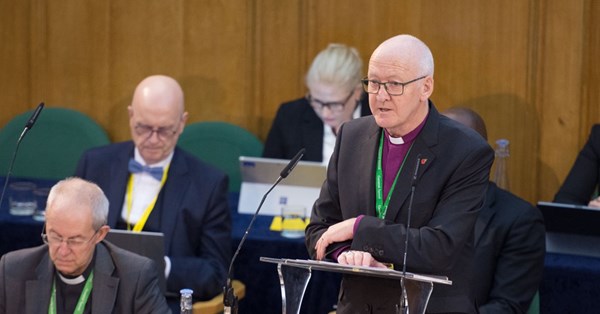 Report of the Governance Review Group.

THE new General Synod was presented on Wednesday with a report recommending a radical reform of the governance of the Church of England. It was running smoothly, with opportunities for questions ahead of a debate scheduled for the February 2022 sessions.

The Governance Review Group (GRG), chaired by Bishop of Leeds, Rt Revd Nick Baines, was established in December 2019 to review the effectiveness of governance structures, processes and activities for and in the Church of England, and to recommend changes to improve their functioning and effectiveness .

There are currently seven governing bodies, or National Ecclesial Institutions (NCI): the Council of Archbishops; Church Commissioners; Pension Board; the offices of the Archbishop in Lambeth and the Archbishop in Bishopthorpe; Central Services of the Church of England and the National Society (parish schools).

These created 122 sub-committees. “This was probably not what Jesus had in mind when he commissioned Peter to nurture and grow a Church,” said the bishop, describing the current structures as “complex, multiple and heavy.” These had increased over time, resulting in a lack of clarity in decision-making and inconsistency with the rapidly evolving charity law, he told the synod.

The GRG report makes 17 recommendations, the main one being to put in place a single new framework, the Church of England National Services (CENS), established under the Charities Act. Three recommendations concern bishops: strengthen the position of the College of Bishops; create an elected Council of Bishops to work on governance and policy issues; and a revision of the post of â€œprincipal bishopâ€.

A minimum number of sub-committees is recommended to serve CENS. Those who have stayed, said Bishop Baines, â€œmust be clear about their purpose, level of authority, reporting lines and methods. They must not exceed the powers and attributions delegated to them by the governing body to which they are responsible.

The Turnbull Report in the 1990s recommended the creation of a single National Council, while Church commissioners only managed the assets. He explained, however, that it never progressed. â€œThe vested interests have defended their territories. We didn’t get the nettle. These recommendations are more nuanced, in line with the practical needs of the Church.

The GRG had examined a series of cases in which these fragile structures had failed, including work on church buildings, communication problems and â€œtaking chargeâ€ of safeguarding to protect the most vulnerable. â€œWhen the Church faces decisions at the national level, these could lie between the shortcomings of our governing bodies. If we had acted sooner, some of our failures could have been avoided or mitigated. “

On the CENS proposal, Bishop Baines said services would be best provided by a more unified national structure. The Pension Board, the National Society and the new Independent Safeguarding Council should remain separate independent bodies, and arrangements for the co-regulation of cathedrals by Church commissioners should continue.

A nominations committee would sit as one of the sub-committees of the CENS governing body. It should establish, he said, “a community of diverse, sufficiently qualified and knowledgeable people from which committees would be convened to oversee nominations and ensure eligibility for election.”

The bishop acknowledged that the current subcommittees were â€œfull of talented people, but we need to have a balance of skills and experience, the best professional skills available. The fault line in church culture is trust, even when, most of the time, committee decisions are where questions of church and tradition do not apply.

The Synod had not been one of the organs that the GRG had been invited to examine, but it had been widely mentioned in relation to its representativeness of young people, the UKME and the laity. He had been judged by the focus groups as “out of touch, between factions and dominated by the parties”. What type of General Synod did the Church need in the future, asked the bishop. â€œIt would be wonderful if this Synod could engage in an honest conversation on this kind of issue. “

Times have changed since Turnbull, as have the expectations of the Church and the public regarding the standards of governance in the 21st century, he said. We could have done more if the work had continued 30 years ago. â€œDon’t let history repeat itself. Don’t let these proposals be torn apart by interest groups, â€the bishop concluded.

Questions came in droves and quickly, many around the proposed nominations committee. In response to Luke Appleton (Exeter) Bishop Baines said: “We cannot avoid questions about when accurate representation does not give you the skills and experience required by charitable law.” TO Debrah McIsaac (Salisbury) he said: â€œThe checks and balances will be the stress test of all proposals. You need an â€œoutside eyeâ€ on any painting that is not inculturated, to ask questions that people on a painting are not used to asking. “

To the Archdeacon of Blackburn, Ven. Mark Ireland (Blackburn), on portrayal: â€œAt some point we have to say that we trust those we appoint to act in good faith, and we learn as we go.

Father Thomas Seville CR (Religious communities) wanted to know the relationship between subsidiarity and the proposed new body, but expressed surprise at the quality of the report, â€œand the warmth I feel towards itâ€. Regarding subsidiarity, Bishop Baines said the body should â€œonly allow things that need to happen at the national level to be at the national levelâ€.

Karen czapiewski (Gloucester) wanted to see governance not “in silos” but in interdependent and properly controlled working groups. TO Canon Lisa Battye (Manchester), who asked about the proposed council of bishops, Bishop Baines acknowledged: â€œThe House of Bishops has over time accumulated a lot of fingers in pies where it does not need to be. ‘have a finger in the pie. “

Canon Bruce Bryant-Scott (Europe) asked if â€œthe abandonment of the chains of the Constantinian establishmentâ€ and the end of â€œthe seizure of prestige and powerâ€ had been considered. Bishop Baines replied, â€œIf we were just to set up the government of a Church, there really is nothing like the Church of England. You have to take that uniqueness and face it. We did not consider dislocation: our agenda was large enough. I don’t think establishment is simply a matter of prestige and power: it comes with a missionary obligation. It’s not a bit cheerful. We see this as a massive obligation and sometimes a big burden. “

Canon Simon Butler (Southwark) indicated that as the Synod was about to elect standing committees in all three Houses, it might be good for them to meet and “follow” the recommendations.

TÃ©mitope Taiwo (London), an ordinand and associate pastor, spoke of Bible study classes with up to 300 millennials who “understood the Bible but not the Church that was founded there.”

Bishop Baines recognized that communicating what had happened to higher levels of the Church was a challenge, â€œbut you can’t just draw a straight line from the Bible to determine how a Church like this should be governed. There aren’t those lines, â€he said. â€œThe next step in the project is to discuss how we translate all of this in an understandable way. “

Parents forced to step into the educational gap | Education