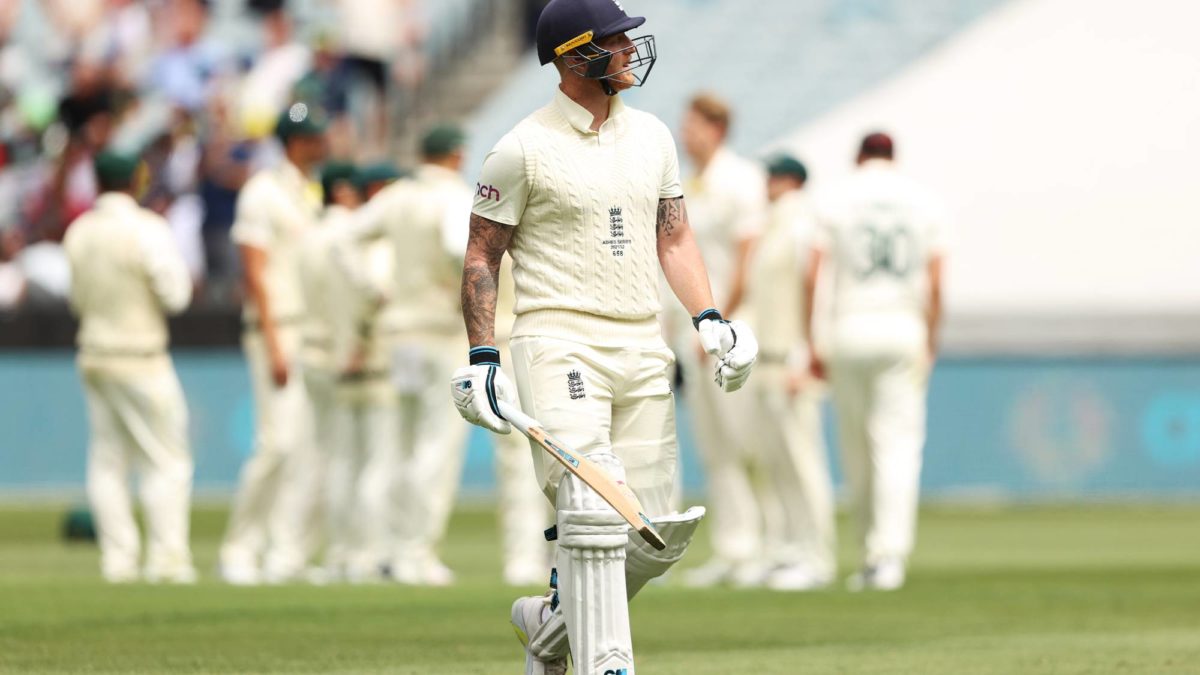 It was more Groundhog Day than Boxing Day, a feeling less of a sporting event than a public execution, as the English media ruthlessly trashed England’s 185 as his softest batting performance ever. the series so far.

There was little room to hide in Joe Root’s cavernous men’s MCG nor from their scathing critics high in the press box as England capitulated yet again in this most lopsided series of Ashes.

“Root is incapable of rescuing a ship already sunk below the waterline. A day when half a century brought him to 1,680 races for 2021, third in the all-time rankings for races in a calendar year, he was a study in desperation as the calm of his teammates was dissolving.

England’s Ben Stokes looks dejected as he leaves the pitch after being sent off by Australia’s Cameron Green on day one of the Third Test. (Photo by Robert Cianflone/Getty Images)

Much had been said in the run-up to the Boxing Day Test showpiece on the Australian cricket calendar that England would bounce back from their miserable losses in Brisbane and Adelaide, but the proof was in the Christmas pudding.

“Just when you think England can no longer disappoint their supporters, they produce a performance to take the Christmas cookie,” lamented Lawrence Booth of the Daily Mail.

“Boxing Day, and the start of the third Test at the MCG, was meant to represent a fresh start, a chance to prove that Brisbane and Adelaide were the exceptions, not the rule.

“Instead, they fought with a barrel-scratching inability to be sent back for £185 – all but the gift-wrapping urn for Australia, with a decorative green and gold bow.”

“It was bombing to rank with anyone, and by the end of it the MCG had long since started to drain. Even some of the home fans may be getting tired of the one-way traffic.

The latest surrender came on a day when English cricket mourned the loss of former England Test skipper Ray Illingworth after a long illness.

“The players wore black armbands in memory of Raymond Illingworth and it’s not hard to imagine what he would have thought – and said to the players – about some of the shots played,” Nick Hoult told The Telegraph.

“This is the last Test in a long year for England of ducks and defeats. England’s Test match batting has disintegrated as the careless attitude towards top-class cricket catches up with the national side who are set to lose a ninth game of 2021, which would be their highest in a calendar year .

“There has only been one worst year since 1950 in terms of average runs per wicket. It fell to 24.8 in that game, the lowest since 1999, and the 50th duck was scored by a batsman English – Haseeb Hameed bringing up an inglorious landmark They were dismissed for under 200 for the 12th time this year, all out an hour after tea in 65.1 overs of incompetence.

“Joe Root called for a reaction from his players to their defeat in Adelaide and they responded by serving up an even worse performance on a desperate first day of the Third Test.”

Former England captain Nasser Hussain lamented in the Daily Mail: “For England fans it was more Groundhog Day than Boxing Day. It was the same dismal batting performance that we have grown accustomed to throughout this year.

“England tried to mix up the field and brought in two new strikers in Zak Crawley and Jonny Bairstow, but that could only have a limited effect. The problem has been endemic in their hitter for a long time.

“The biggest concern was the mix of poor technique and poor shooting, especially from senior players.”

John Etheridge of The Sun fumed: ‘Wickets have been thrown into an embarrassing catalog of self-destruction.

“And England’s four most experienced batsmen – Root, Ben Stokes, Jos Buttler and Jonny Bairstow – were most to blame.

“They offered their wickets to Australians with all the seasonal generosity of cricketing Santas.

“They might as well have had wrapping paper and a bow around their bats.”

Simon Wilde, in The Times, grimly compared Boxing Day to the festive MCG as more like the scene of a “public execution”.

“At the end of opening day at the MCG, on day ten of the series, there was absolutely no idea that this group of English cricketers had made any progress in breaking this depressing cycle of failure,” observed Wilde.

“As so often on a tour of England here, one gets the feeling that this is not so much a sporting event as a public execution, staged to satisfy Aussie egos.

“There are two teams playing two different versions of cricket; the one Australia plays is suitable for the conditions and the one England plays is not – two nations divided by a common pastime.

“Test cricket as played in Australia is fundamentally alien to England’s professional player base.

“There is no mystery as to the nature of the problems. The pitching pace is faster, the pitching bounce is higher and the Kookaburra balls are less susceptible to seam and swing. The climate is harsher and more impetuous people.

The Guardian’s Ali Martin said England had their pants down at the MCG.

“The debriefing in Adelaide was meant to represent a fresh start for England, but was instead followed by pants down in Melbourne.

“Their Boxing Day hit was so utterly dysfunctional that even the writers of EastEnders might have found the script a bit too depressing for their annual dose of celebratory humbug,” he sneered.

“The most egregious dismissal came from the most senior of the lieutenants, Jos Buttler, who hoisted Nathan Lyon to the lone defender in the depths of the last before tea. and no sooner had the shot been made than Buttler lowered his head knowing the result.

“By trying to kick longer, he only managed to slide the ball towards the middle of the wicket instead.”