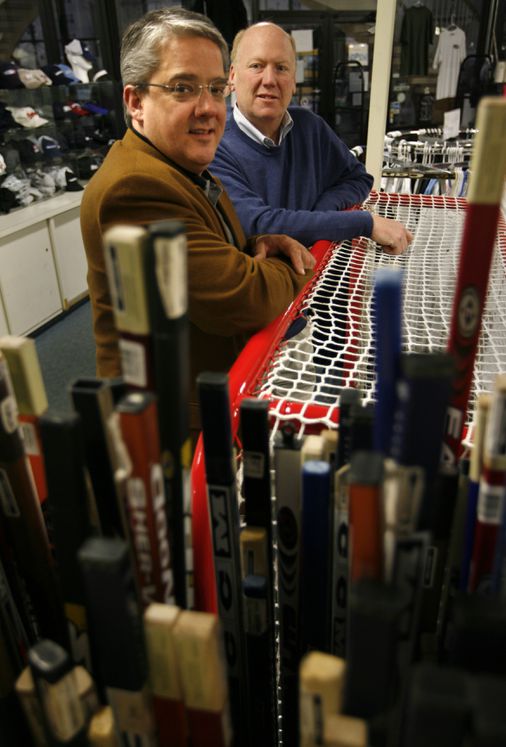 â€œIn the world of hockey, you have these qualities to take care of children. Wes would do anything for anyone, â€said John Butler, a longtime friend and former Marlborough High coach, of Tuttle, who died suddenly at 62 on Saturday.

Tuttle has served as the General Manager of the NESC since 1994 and has hosted countless hockey players, coaches and teams, from youth to professionals and adults.

â€œWes meant so much to so many people inside and outside of hockey that no words will do him justice,â€ said Jamie O’Leary, assistant general manager of the Sports Center. â€œHe was a friend to everyone, and here at NESC, we can never replace the work he did. We just hope we can make him proud of the way we go. “

â€œIn the world of hockey, you have these qualities to take care of children. Wes would do anything for anyone. ‘

Tuttle grew up in Marlborough and attended Hudson Catholic before playing junior hockey in Canada. Upon his return, he worked for the Commonwealth of Massachusetts, managing the Navin Rink in his hometown, as well as the Philip J. Weihn Memorial Pool in Clinton.

Cushing Academy men’s hockey coach Steve Jacobs grew up in the nearby town of Hudson and later coached Marlborough High in the 1980s at Navin, where he developed a long-standing friendship with Tuttle.

â€œHe had this gift for building strong relationships. That’s why so many people are affected by this, â€Jacobs said. â€œHe learned from so many different people. It was just kind of born into him, I think. Just a loyal, positive and optimistic outlook.

Tuttle was recruited by the owner of the NESC, H. Larue Renfroe, to travel around the city and manage the new facility when it opened. From four ice caps, the site more than doubled in size in the years that followed. Renfroe and Tuttle also managed the Minuteman Flames youth program, producing NHL players such as Jim Campbell, John Lilley, Mike Grier, Greg Mauldin and Bobby Butler, as well as 1998 Olympic gold medalist Tara Mounsey.

In a statement on their website, the Flames said: â€œHe had a long-standing love and dedication to his family, ice hockey, the sporting community in general, the town of Marlborough and the Minuteman Flames like no other. , and was a friend of all. among the many people he came into contact with. He was one of a kind and will be sorely missed. “

Like many others, Jacobs thanks Tuttle for helping his son Stephen, who played Cushing and UMass.

Rugo Santini became Winchester’s all-time top scorer in 2001 and played at Brown. He and Ned Havern of Arlington, who played in BC and later in the minors, skated with the Flames for about a decade under Tuttle and Renfroe when the team was based at Valley Sports in West Concord and then after the opening of the NESC.

â€œIt was a treat,â€ Santini said of Tuttle. â€œHe was a big, beefy guy, and he looked intimidating. But he was a great guy. He was really tender at heart.

â€œThe way they treated you was first class. Wes ran the sports center, but he would do anything for you, get you sticks or whatever.

Peter Trovato remembers playing for the Flames during the construction of the NESC, skating on the first surface of ice that was ready to be used as construction continued around them.

â€œAt the time, I think we thought Wes and Larue were a little crazy building this huge complex,â€ said Trovato, who went on to perform for the Catholic Memorial Dynasty in the late 1990s and then at UMass. â€œBut Wes was so passionate about the project and the positive impact it would have on the Flames and other youth hockey organizations, that he truly dedicated his life to making it a huge success.

“It was pretty messyâ€¦ and Wes met our team after practice and told us to be patient because” Very soon this complex will be the best facility in the country and dedicated to the Minuteman Flames and make you the best hockey player. players around. ‘ And has he always been right.

Even those who have never played for Tuttle, or worked alongside him, have always been influenced by him.

â€œI grew up in this rink,â€ said Florida Panthers forward Frank Vatrano, whose parents would drive him over an hour from East Longmeadow to play for the NESC Junior Bruins. Vatrano’s cousin Barry Almeida, who played at Boston College and plays for the Worcester Railers, went through the Flames.

â€œWhen you’re at an ice rink for so long, you develop relationships. I returned to the NESC last year for the first time in a long time and [Tuttle] was one of the first people I spoke to, â€Vatrano said. “He wasn’t involved with me, but I still had a great relationship with him.”

One of Tuttle’s proudest moments, according to Butler, was being on the bench as an assistant coach when Marlborough High won the Division 3 State Championship in 2005.

While Marlborough still plays at Navin, Hudson High was one of the first teams to enter the NESC when it opened.

Vatrano said, â€œAt the end of the day, you are businessmen. But when you are a businessman and a sociable person, this is what draws people to you.

More than anything, said Maguire, it was Tuttle’s demeanor and professionalism – his experience in hosting major events off-site – that made him successful.

â€œWe would have 15 back-up buses in the front and I would worry about the teams not showing up. It would be cool as a cucumber, â€said Maguire. â€œIt had a calming effect on a somewhat hectic day.

â€œHe would never get shaken. He would have parents yelling at him because we were charging money [for admission], but he would take care of everything. The Coaching Association will certainly never thank him enough for what he did behind the scenes.

Tuttle was among a group of hockey officials and facility managers who successfully pushed the state to update guidelines for ice hockey during the COVID-19 pandemic, allowing thousands of players from Massachusetts to return to the ice.

â€œMost people involved in youth hockey have had the opportunity to meet or work with Wes over the years,â€ said Bob Joyce, president of Massachusetts Hockey. â€œHis passion for the game and his willingness to try and adapt to any situation made him special. It didn’t matter if it was a five-hour overtime match on a Sunday morning or a Sunday morning. ‘A Missed Opportunity Massachusetts hockey event, Wes was always looking to make our lives easier and find a favorable solution.

â€œThe commitment and dedication Wes brought to the world of youth hockey will be missed. “

Calling hours are Thursdays from 11 a.m. to 7 p.m. at the New England Sports Center. A private funeral will be held on Friday.

Says Butler: â€œYou are very lucky to have someone like that as a friend. We will miss him.

Jim Clark can be reached at [email protected]